I May Have A Scrap Problem... A Disappearing Act! 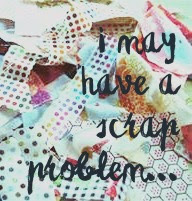 As you probably already know, I was fortunate enough to attend QuiltCon last week.  I signed up for a class called Dynamic Quilts with Solids, taught by Nydia Kehnle.  Considering how many solid scraps I have, you can guess that I was really excited!  We were instructed to bring about 125 7.5" squares, in at least 25 different colors.  Well, I went nuts, pulled everything I could cut a 7.5" square out of, without rhyme or reason, and showed up to class. 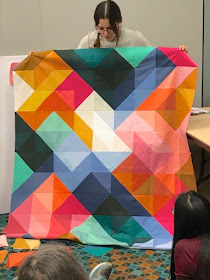 This is the class instructor, Nydia Kehnle, and one of her fabulous quilts!  We spent the morning making a bajillion half square triangles, then worked on laying them out with her guidance.  Alas, I had too many colors with no connection between them to work well.  I learned that I should have spent more time researching the type of quilts she made to get a better idea of what colors I needed to bring!

But that meant that I had a lot of HSTs to use up and no plan for them.  I tried laying them out as HSTs at home, but found the they really didn't "flow" like I wanted them to.  So I tried them as hourglass blocks, and that was ok, but no "pop".  What to do? 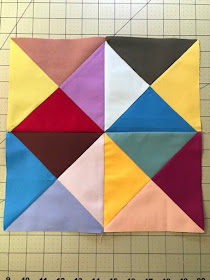 After staring at this for a while, I decided to do something drastic - I cut it up!  After all, somebody had to take the plunge to make the first disappearing nine-patch, right?  So here goes... 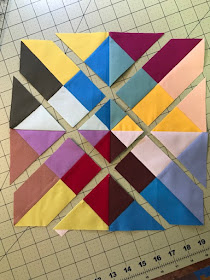 I cut on either side of the diagonal centers, breaking the block into nine patches. 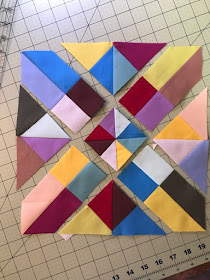 Then I rotated the center a quarter turn clockwise.  Next, I took the top left corner and the bottom right corners and switched their positions, and did the same with the other two corners. 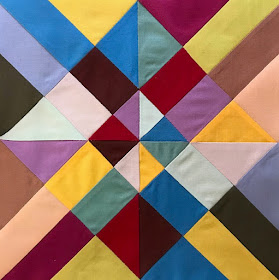 Once it was sewn back together and trimmed, this is the result!  I posted a picture on Instagram, and got some really good feedback, so I'm going to provide a more specific tutorial below.  For the tutorial, I used 10" squares - a layer cake that was gifted to me a while ago, so I'm happy to be giving it a chance at quilt-y life!

The first step is to make your HSTs.  I would suggest pairing up your pieces to give good contrast for this block.  Once completed, press the seams to the dark side.  Pair them up to make the hourglass blocks, being sure to use four different colors in each one. 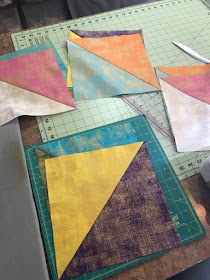 Lay the two HSTs right sides together, with the two seams nesting into each other.  Place your ruler from one corner to the other, crossing the seam line. 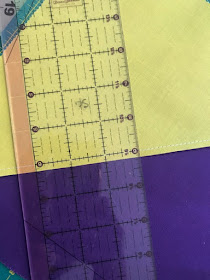 Line up one of the inch markers with the seam line as shown above to ensure that your ruler is perpendicular to the seam.  Make a line from one corner to the other. 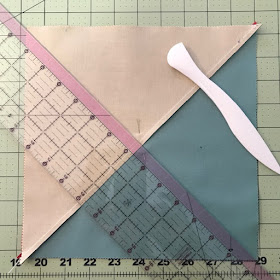 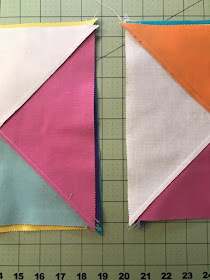 Once you have made and pressed all your hourglass blocks, turn them over so you can see the back sides. Each pair of near-identical blocks will "spin" in a different directions.  Make two piles, one spinning clockwise and one spinning counter-clockwise. 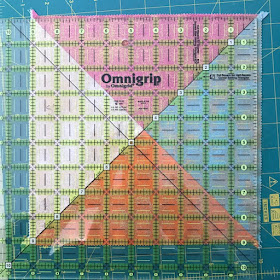 Now it's time to square up those blocks!  Starting with 10" squares, I found that these hourglass blocks squared up to 9".  Depending on what size you begin with, yours may square up smaller or larger. 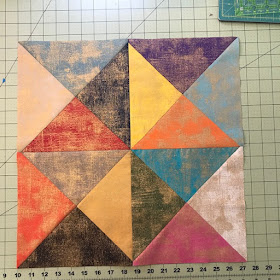 Being sure to use blocks that all spin the same direction, choose four to put together into a four-patch hourglass block.  Assemble the block.  Press it carefully, spinning the seams around the center. 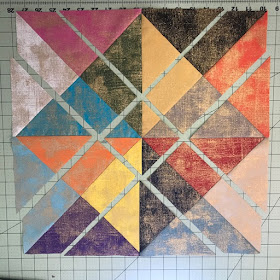 Now it's time to cut it up.  Be careful!  For this size block, I chose to measure 2" from the center diagonals.  How far you cut is up to you!  Rotate the center 1/4 turn clockwise, swap the upper right and lower left corners, and swap the upper left and lower right corners.  NOTE:  If you aren't happy with the way the colors align, feel free to move things around until you are pleased with the layout.  I had to do that on one of my smaller blocks, and it worked out just fine! 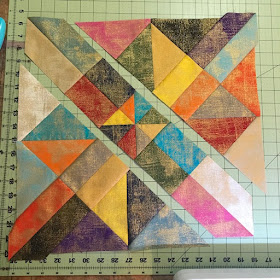 Sew the rows together on the diagonal, carefully matching the seams.  The corners will be longer than the sides - don't worry, it will be trimmed later!  Sew the three rows together, once again carefully matching the seams.  Square the block up, cutting off the corners that extend beyond the top, bottom and side seams.  This particular block, which began from 10" squares, squared up at 16". 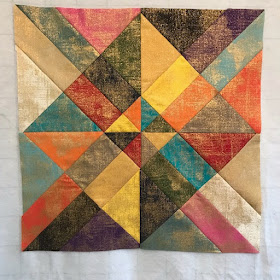 And there's your finished block - a disappearing hourglass block!  I really wanted to know what it would look like when placed with others like it - what secondary patterns would appear. 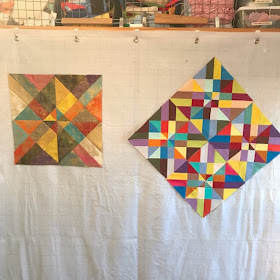 Here you can see the one larger block, next to four of the smaller ones made from my class HSTs.  In the on-point layout, the crosses are more visible, and in the horizontal layout below, the squares seem to show up better. 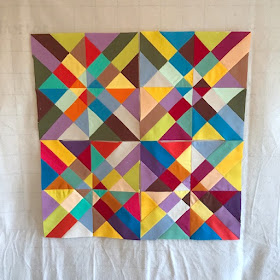 It's going to be fun to play with this block!  I'm also interested to see what it looks like in prints - but that's for another day, as I have some quilting I must get to now.

Let me know if you give this a try (particularly if you don't understand something or find a better way to do something!) I'd love to see what you come up with!