Welcome back!  Did you enjoy the first day of the hop?  I know I found a lot of inspiration and I'm just itching to get started on some new projects!   (OK, maybe I'm just itching because I'm sitting outside to write this, and it's hot - but whatever!)  Today's stops on the hop are....

Grace of Citymousequilter, Vicki of Vicki's Crafts and Quilting, and Pam of Quilting Fun all have some special Christmas-themed projects to share with you.  Be sure to check them out, then leave a comment on their posts to be entered in the giveaway!  If you haven't heard about the giveaway, be sure to go back to this post and find out all the details.  Participation is the key!!

But wait - - - there's more!  Today is the second day of instructions on the tutorial for this quilt... 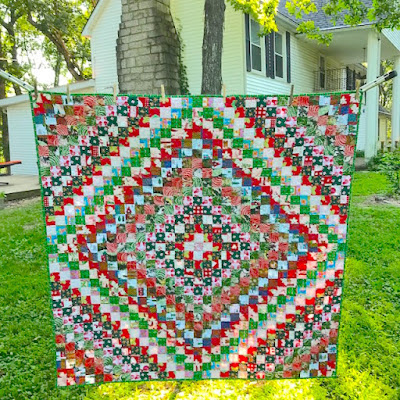 ...right here on this blog!  Yesterday we chose fabric and did our cutting, today we'll start stitching things up.  Let's get started!

Grab one of the strip sets you put together yesterday (you should have four sets, all identical).  Start with the shortest strip and place the next strip in the stack next to it, long edges together.

TIP:  Look at the ends of your strips before sewing.  Usually, one end of the fabric will be printed all the way out to the edge, and the other will have a white selvage edge with the fabric information printed on it.    You can see this in the picture below. 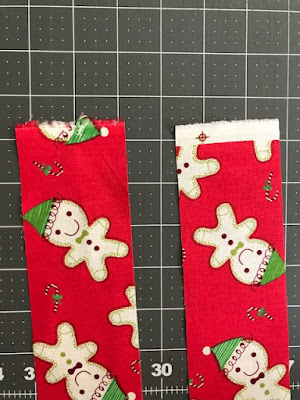 I always start from the end printed all the way out (the one on the left) so that I have the most usable fabric available.

TIP:  Use a fairly short stitch for your sewing. You’ll see why later!


Matching those two ends, sew the two strips together along the long edge, taking care not to stretch either strip.  If you have a tendency to pull your fabrics as you sew, you may want to pin the strips together.  It doesn’t matter if one strip is longer than the other (it probably will be).  Just stitch to the end of the shortest strip.

TIP:  Mark the end of the “shortest strip” with a pin or Clover clip for future reference.  (This will help ensure you keep your strips in the correct order and don’t sew one to the wrong side of the strip set!)

At this point, press the seam open.  You may not usually press your seams open, but trust me, at this point it will make your life a lot easier.  You can press the seams to the side after a later step.  And don't skip pressing!  It's much easier after each seam, and it must be pressed for a later step, or your job will be much harder.

TIP:  Press, don't iron. That means laying the iron on the opened seam, then picking it up and laying it on the next section without sliding the iron over the fabric.  This will  help avoid stretching either the fabrics or the seam.  Here's a video tutorial that can clarify what I mean if it's unclear.

Now square up the end of the strip set you just sewed using a square template, so that both strips are the same length. 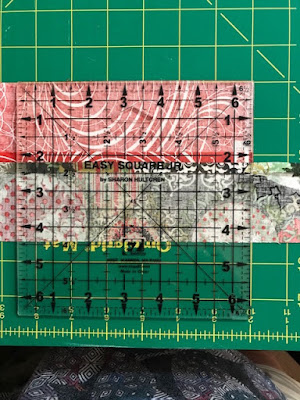 Using a square template rather than a ruler at this point will allow you to get the most precise square possible, by lining up the seam and the edges with the straight lines on the template.  Trim off any overage.  Do not trim off the selvage at this time.

Pin the next strip in the stack to the strip you just trimmed at the end AWAY from the pin or marker you placed earlier on the first (shortest) strip.  Notice that you are pinning the selvage end of the new strip to the cut end of the strip on the strip set.  That will help you always pin to the right end.  This is important because you will also sew from the cut end, thereby alternating the directions in which you sew this piece.  Alternating directions of sewing the seams will help keep the piece square.  So will not stretching those fabric pieces!  Sew the long edge of the new strip to the strip set.

TIP:  Allow the feed dogs to feed the fabric through your machine, using your hands merely to keep it going straight.  Less is more in this case!

Repeat until all the strips are sewn together, squaring up the end after each strip.  When you have sewn several strips together (or no longer have a square template large enough!), you can start using your ruler to square the end.  Remember to use the horizontal markings as well as the vertical edge when lining up your fabric to get the straightest edge. 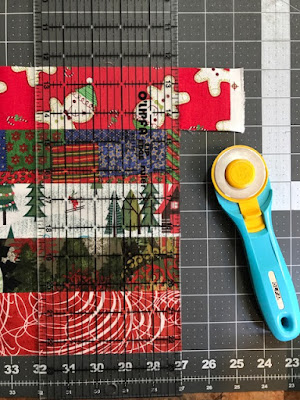 Remember to alternate the direction you sew on each row!  It's surprising how much of a difference it makes - and not something you want to find out the hard way.  Let's just say the pictures here are from the second set of strip sets I made! 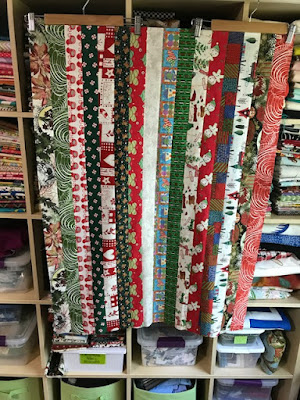 Set your finished strip set aside, ideally hanging it somewhere you can see it so that as you assemble the other three sets (our task over the next three days) you can verify that the strips are in the same order as you go.  (Don't ask me how I know this!)   It's very important that all four of your strip sets are put together in the identical order.

That's all for today - and for the next three days.  It's fairly easy to make one of these strip sets in a couple of hours, so if you can carve out that much time today and for the next three days, you'll have your strip sets ready for the next step, which I'll post on July 19th - Day 6 of the hop.  In the meantime, there'll be something fun here on this blog and an introduction to the day's hop blogs, so be sure to come back each day - remember the giveaway!

That's it for today!  Remember to visit today's stops on the hop, and if you missed yesterday's, take some time to get caught up!  Leave comments to be entered into the giveaways, both here and on the hop stops.  Every comment counts as an entry (but only one per blog unless the blogger says otherwise!)  I'd love to know if you're working on your own Santa's Trip Around the World quilt (hint hint!)


Here are the blogs participating in the 12 Days of Christmas in July blog hop!

Seams To Be Sew
Stitchin at Home
Domestic Felicity

The Colorful Fabriholic
Smiles From Kate

Devoted Quilter
Kathy's Kwilts and More
All Points of the Compass

Anja Quilts
PickingandStitching
A Dream and a Stitch