As I write this, there are only 36 days, 6 hours, 20 minutes and 47 seconds until Christmas…..  I've moved beyond stress, and I'm living in that lala land where, as was said in "Shakespeare In Love", strangely enough, it will all turn out well - who knows how?  It's a mystery!  But I have made some headway on some projects and I'll share some of the progress in this post.


1.  Quilt six quilts for ministry needs already on the list.
Done!  Three have already been delivered, and three others are out having the binding put on.  Here's a couple of the quilts… 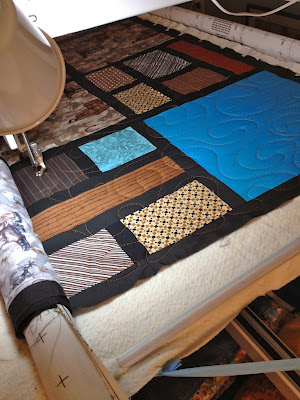 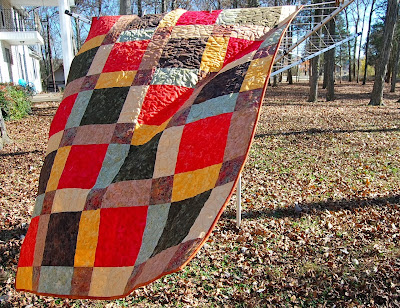 4.  Cut out the butcher aprons.
Done!  All ready to be sewn together.

5.  Cut the replacement pieces for the antique quilt repair and sew the fans together.
Done - this is one thing I'll share a bit more about below.

6.  Make some ruffled pants for Emmy.
Done!  And not only did I make the pants, I also made a matching pinafore.  Emmy is an excellent clothes model - in fact, when I tried it on her for size before I finished it, I had a hard time getting it back off her!  She wouldn't let me have it back until I promised she'd get to wear it later.  Here's the finished product! 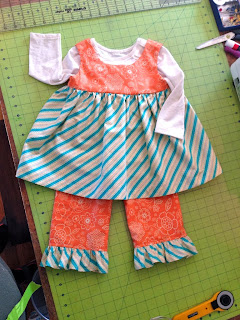 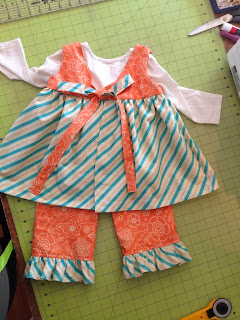 7.  Piece a baby quilt top for a friend.
I delegated this to another member of the quilt ministry.  I really should do that more often!

8.  Start cleaning the house for the holidays.
Started - it shouldn't be too hard to finish it up this week!

9. Keep up with any new ministry needs that arise.
Done.  We've had two more requests come in that I made backs for - they are ready to be quilted tomorrow.


As promised, here's more about the antique quilt repair.  Well, I must confess that Saturday afternoon, I was totally devastated - I was sure I was going to have to tell my friend that his quilt was beyond repair, because I could not figure out how in the world to make it work. 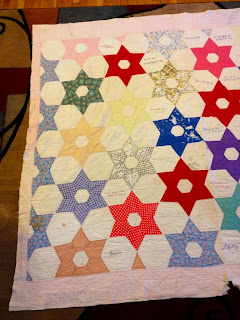 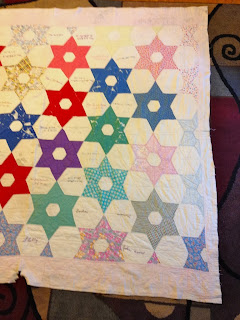 This quilt was pieced in 1938 - I know this because some of the signature blocks are dated.  My original plan had been to make a template, cut all the pieces, sew the stars together and then appliqué them by hand to the quilt after cutting the original, damaged pieces out.  The quilt has been used, washed and dried so much that it is very shifty.  And my suspicion is that the pieces were not very uniform in the first place!  The upshot of that is that each five-sided piece of each star was a slightly different shape and size.  NOT conducive to repairing! 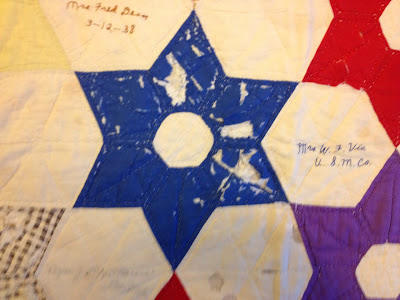 Then I thought I'd pick out the stars and cut each piece individually.  Well, whoever quilted this quilt meant for it to stay quilted forever!  Where it was knotted, I could not get the knot out, no matter how I tried.  And I was afraid that if I went between the layers, I would destroy whatever was holding the quilt together in the first place. 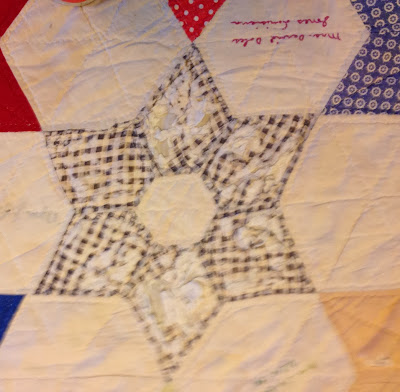 As my husband would tell you, I do not deal well with being told that I can't do something.  Stubborn runs in my family!  But I couldn't see any way that I could get this done before Christmas, and maybe not for months and months if I had to make a template for each star blade.  So I bit the bullet and called my friend.  Now, he is not a quilter.  He doesn't sew.  Which probably makes him very qualified for thinking outside the box!   After I told him I couldn't do it, he started making suggestions - and when he suggested just patching the quilt, an idea began to form in my head.  I told him I'd give it a try. 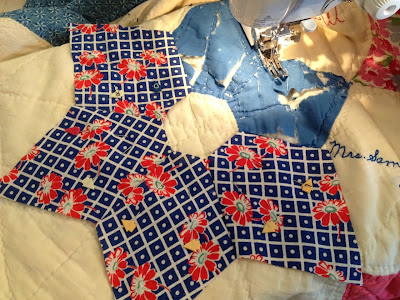 At first I thought I would place the star blades that I had cut over the ones on the quilt, and raw-edge appliqué each one on.  But when I laid the first blade down, I realized that if I laid a second blade on top of it and stitched where the seam connected the blades on the quilted star, it would be kind of like paper piecing.  So I did that, carefully stitching only the length of the seam on the quilted star, all the way around the circle.  When I got to the last blade, I folded the edge over, pinned it to the first blade, and edge stitched it down.  Then I folded the edges under all the way around the outside and inside of the star and edge stitched them down. 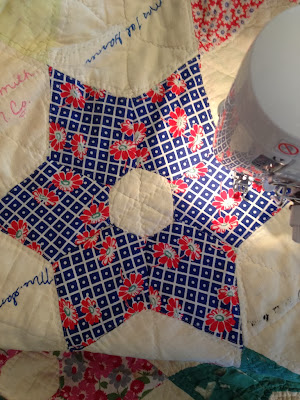 It's not a perfect repair, and it's not as neat as I planned it to be originally, but it will allow my friend to enjoy his quilt without feeling like it will disintegrate when he touches it.  I've got four more stars to replace, and this spot on the border to rebuild… 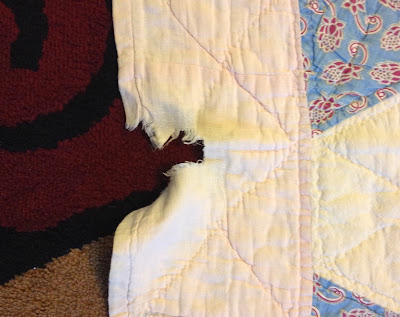 The sugar sacks that were used for the border are really cool, but I couldn't find any more.  I did find some light pink fabric that has a similar weave.  I'll run it through a bleach wash to see if I can get the color down to something similar to the existing border.  And then I'll put a new binding on it to cover up the tattered edges.

So now that I've bored you to tears with that (unless you were smart and skimmed over it!), here's my list for this week…

1.  Quilt two quilts for the ministry.

4.  Sew up the butcher aprons.

5.  Get the house cleaned up for the holidays.

6.  Make up my contributions to Thanksgiving Dinner and put in the freezer.

7.  Set up the Christmas tree Friday.

8.  Keep up with any other ministry needs that arise.


It's a short week for me - I'll be heading to my FIL's at the end of the week to help clear out his house, then back home just in time for Thanksgiving (which is why I need to freeze my contributions to dinner!)  I may not get all this done, but I hope I at least get the antique quilt finished - it would be so nice to not have that still on my plate when I get back!

So now the question is - - - what are YOU working on this week?