A Slight Change of Plans...

I have to say that I was completely off track yesterday, thinking that it was Monday (again!) and so completely forgot that I needed to write a What's On The Bookshelf Wednesday post!  But since I've been meaning to write a post about my trip to China, I decided to do that today.  WOTBW will be back next week!

After leaving Nashville very early on Saturday morning and spending about fifteen hours on a plane, we landed in Beijing, China mid-afternoon on Sunday.  According to the guidebooks, we were recommended to stay awake as long as possible to help mitigate the inevitable jet lag.  I have to say, the ride to our hotel certainly helped keep us achieve that goal!  In a city of 24 million people, traffic is incredible - and to most of the drivers, lane lines were simply a suggestion.  As you can see in this picture, every bit of roadway was utilized - even the emergency lanes. 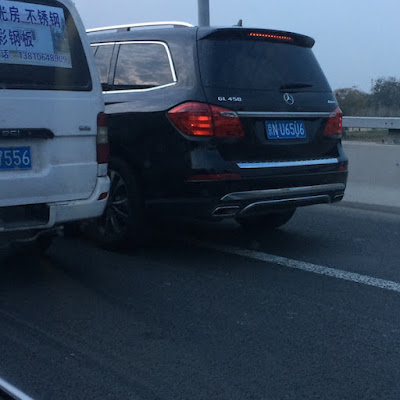 I took this picture from the back seat of the car we were riding in.  Yes, our driver was completely centered over the lane line!  This is the accepted way of driving in Beijing - and yet we saw few accidents, amazingly enough.  We even saw a huge tour bus do a u-turn on a major thoroughfare! The architecture was amazing - lots of high rise apartment buildings to house the millions of people living in the city. 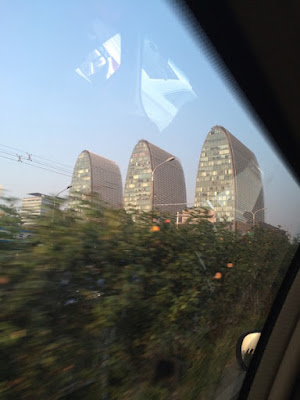 Beautiful touches that reminded us that we were a long way from home... 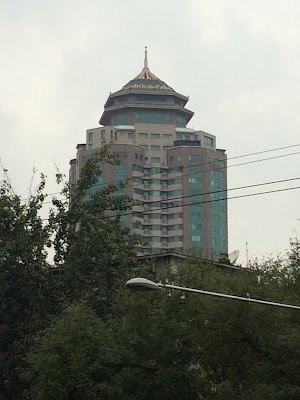 And even some quilt-y inspiration! 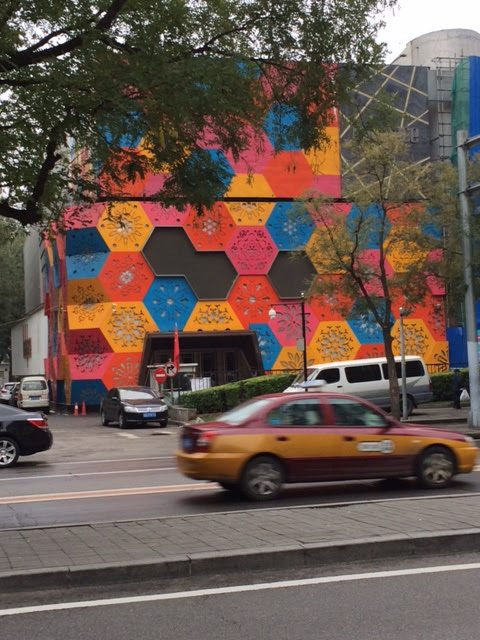 There were some interesting sights when we walked the city streets later, too.  The streets are very clean - understandable when you know that brooms like this one are located all over, tucked away inside planters, on top of street signs, any place easily accessible yet out of the way.  We frequently saw workers sweeping the sidewalks clean of debris and leaves. 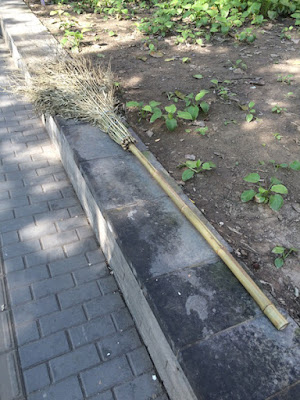 We also saw something really unique - a "snuggie" for a motorcycle rider!  You put your arms into it and hold onto the handles of the bike - the front flap protects your chest, legs and knees from the cold breeze as you ride between cars and in the emergency lane to get through traffic! 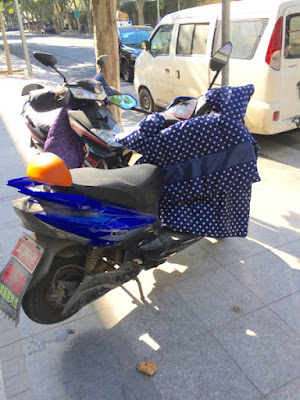 The next morning, we headed down to the restaurant in the hotel for breakfast... 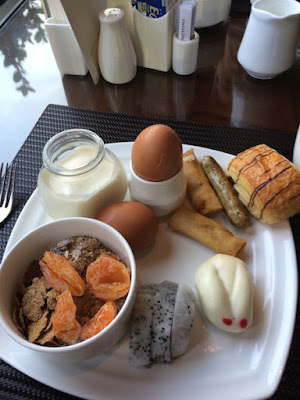 It was an interesting mix of Chinese and more European-type foods - I loved having dumplings and spring rolls for breakfast, and the dragonfruit was incredible!  Fresh mango yogurt wasn't too bad, either! 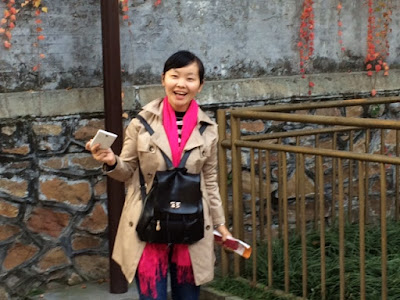 We met our guide, Joy, in the hotel lobby.  It was her first day on the job as an administrative assistant for the head of the company my husband's company is affiliated with in China, and her first day working in Beijing.  She told me she was a little nervous about being a tour guide, but she did a wonderful job!  We climbed into a car (with wi-fi, no less!) and headed for the Great Wall of China... 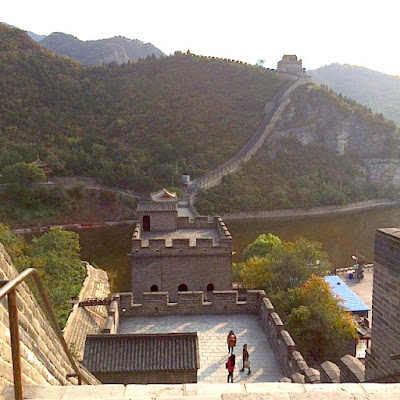 No one mentions that the Great Wall of China should really be called the Great Staircase of China... 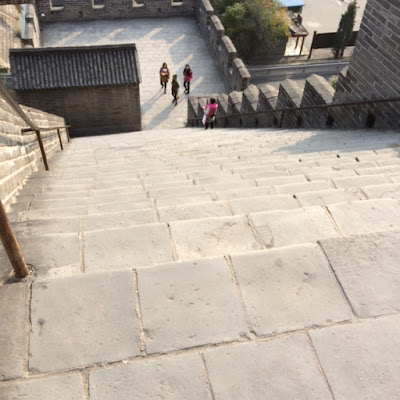 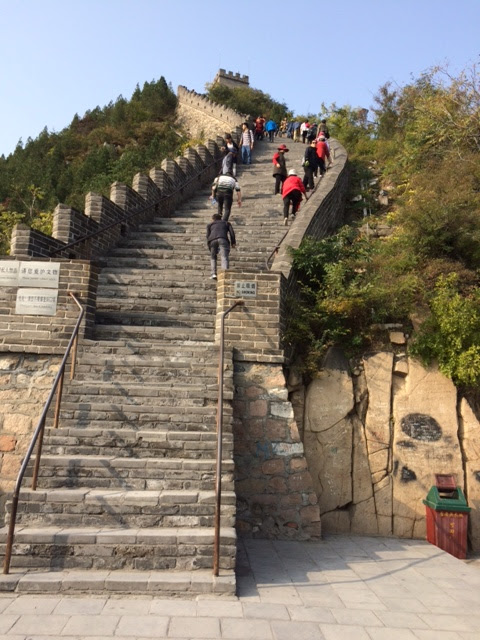 ....but it is quite a sight to see!  The part we went to was the closest one to Beijing, and supposedly not as commercial as one of the other parts nearby, but it also required much more stamina on the part of the tourists.  I went part of the way to the "top", my husband went a good bit further, and another man we were with went all the way up with our guide.  Poor Joy said her knees were really wobbly by the time we got to the bottom again - I think it's actually harder going down than going up, because the steps are not even.  Some were 8" tall, others 12", and some were even more than that.  It made for a lot of jolts as you came down. 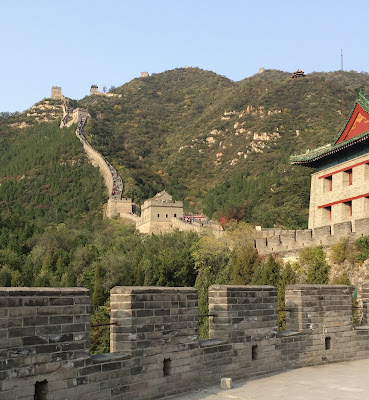 But it was truly an amazing sight to see, and astounding to think that it was built by men.  The size of it alone boggles the mind!

It's hard to see, unless you can enlarge this picture, but the Wall runs across the top of the nearest ridge in the picture.  The whole thing is between 5,000 and 31,000 miles long, depending on which source you choose to believe, and is the only man-made structure visible from outer space. 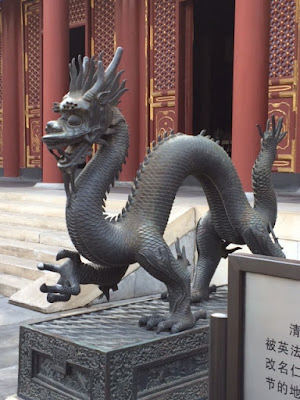 After the Great Wall, we headed to the Summer Palace, where we saw our first dragon!  I really love this guy - he's got style, and reminds me of the dragon voiced by Eddie Murphy in the movie Mulan... 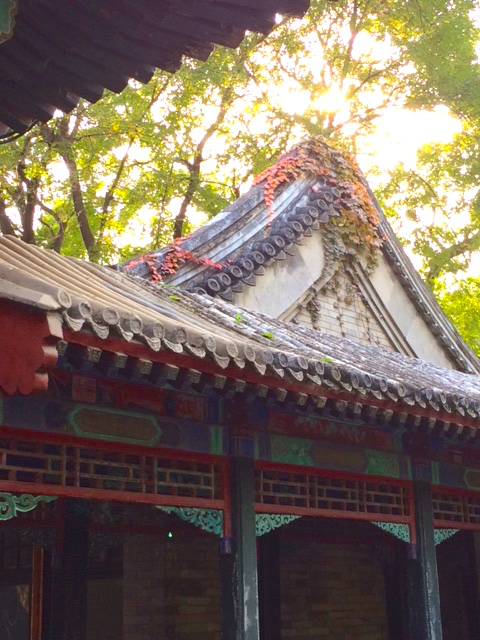 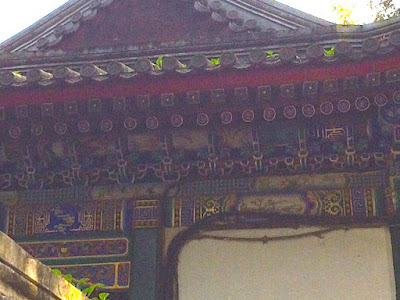 This was actually a wall in a back area, not a main thoroughfare.  Hard to believe they'd spend this much time and energy making the alley look beautiful - but they did! 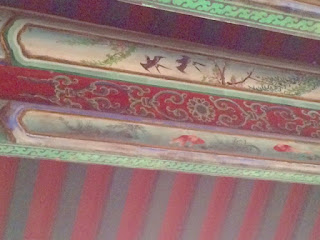 And this is a shot of the ceiling of a covered walkway next to the lake at the Summer Palace.  The walkway is purported to be the longest straight covered walkway in the world, and the entire ceiling is decorated with beautiful pictures, themed to each section of the path.

One day, Joy took me to the Silk Market, which strangely enough, doesn't really sell silk - unfortunately! There were lots of beautiful things to see, and many people yelling, "Hey lady!" at me, offering their wares for a "really good deal".  I was amazed to see our sweet little shyly quiet guide light into the vendors like a fishwife bargaining to get me the best price possible - it was very enlightening!  I think her Chinese Zodiac sign is the bulldog - LOL!  After a while we got really good at double-teaming the vendors, though, and I did come home with some lovely souvenirs for a pittance of what they were asking for them.

There were some shops that custom made mens suits and sarongs for women, although they didn't sell fabric on its own - but they did have some wonderful old sewing machines in the window! 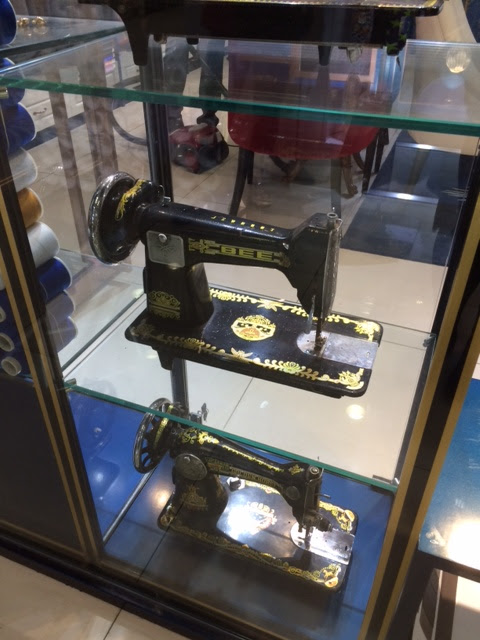 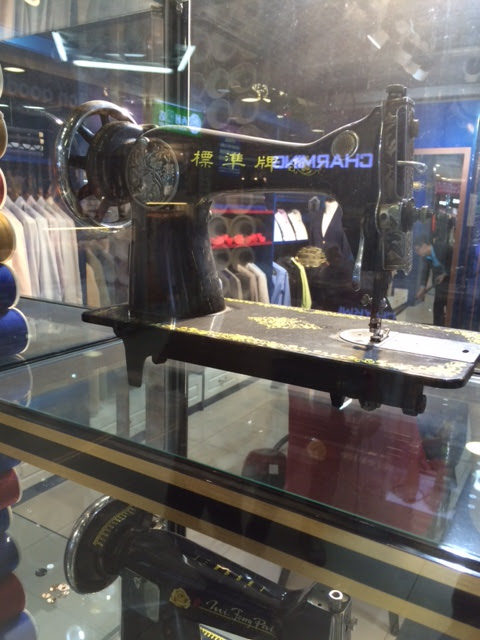 I must confess that Joy thought I was really strange taking pictures of old sewing machines, but took it well in stride - I imagine it wasn't the only thing that made her think I was strange!

We had a wonderful trip, and I learned some amazing things about China.  Some of the more practical ones?  Don't drink a lot of water before you go out and about - the public restrooms outside of the hotels are basically holes in the ground that you squat over.  Definitely not Western style!!  It requires quite a bit of muscle to manage this feat...  And you REALLY can't drink the tap water in China - even the locals don't drink it.  If you ask for water in a restaurant, you will be brought hot water and tea cups.  But it's cheap to buy bottled water in the market - we bought four waters and two Diet Cokes on our first night and paid the US equivalent of about $2.  PS Diet Cokes do NOT taste like they do here.  And if you want to know how to perform a breast self-examination, you can learn by watching the video screen on the subway.  I was slightly caught off guard by seeing that!

The Chinese people are wonderfully friendly, and many of them have never seen an American before.  We were asked to pose in many family pictures in the course of our sightseeing!  And I learned much about the young people of China while I was shopping with Joy, too.  She asked me if there was any advantage to being married in the US, and after thinking about it for a few minutes, I told her that income taxes were cheaper if you were married.  She shook her head as if that explained it. When I questioned her about it, she said that most young couples who marry end up living in different cities because it is where they find work, and if they have children, the children live with the grandparents out in the country. Families may only see each other on vacations.  It is definitely a different lifestyle, and doesn't provide much incentive to marry.  When young couples marry, they also take on the responsibility of caring for four parents and eight grandparents!  It hangs a burden around their necks that is hard to imagine here in the States.

We really enjoyed our time in China but it is nice to be home!  I hope you've enjoyed my "slide show" - I promise not to bore you with pictures of this trip again!

Email ThisBlogThis!Share to TwitterShare to FacebookShare to Pinterest
Labels: China