Make-A-List Monday - In and Out!

Hi, all!
I feel so much better this week than I did last week, and just a little bit virtuous!  It was a good week for sewing, and I got a lot done.  So let's take a look...
1.  Assemble the golf memory quilt top.
2.  Quilt the golf memory quilt.
Done!  I had so much fun with this pattern, and it's definitely one I'll use again.  I may even use it with regular fabrics! 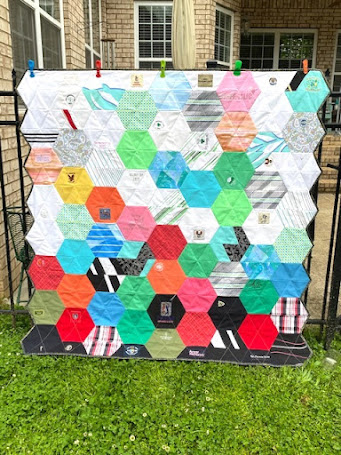 3.  Quilt at least two high school quilts.
Done - and not just two, but four!  It's just a drop in the bucket, though, for what we need to accomplish in the next few weeks.  I'll still be working on these this week, too. 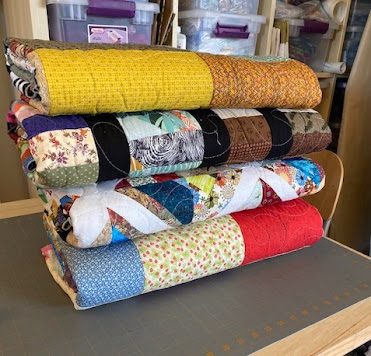 I also made this top last week, using the Extreme Disappearing 9-Patch pattern, slightly modified to make it twin size. 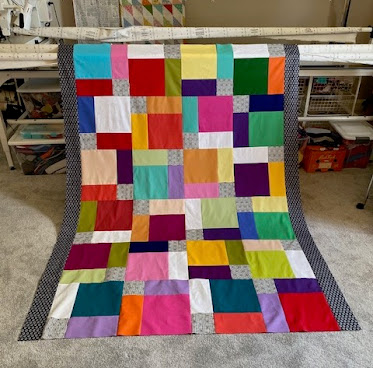 This is such a quick and easy quilt!  I've used the pattern in the past and timed it - I can make a quilt going from a stack of 10" squares to a bound, finished quilt in a little over three hours!
So last week went well!  I do feel like I can breathe a sigh of relief, now that the last of the commission jobs I had in hand are finished.  I have a couple of others on the horizon, but so far not in house, so I can work on some other things.  Here's my list for this week....
1.  Quilt at least four more graduation quilts.
2.  Work on the hourglass blocks for my Me Sew Happy quilt.
3.  Finish re-organizing the kitchen.
4.  Work on the front planters.
A word of explanation about that last one - here's a picture of the front of my house as it looks today. 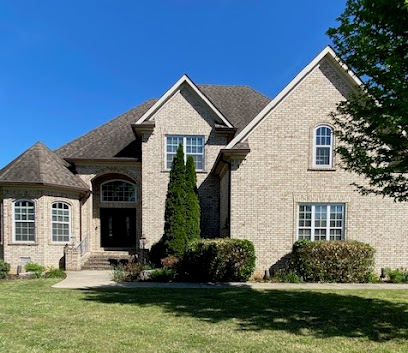 See those two large green bushes in the front?  They were allowed to over-grow in the year the house was on the market before we bought it, and they've reached the point where they can't be trimmed back enough (off the sidewalk) without looking naked.  So we're having them taken out this week.  Then we're going to put a pair of these Ebony and Ivory crepe myrtles on each side of the right hand (garage) window... 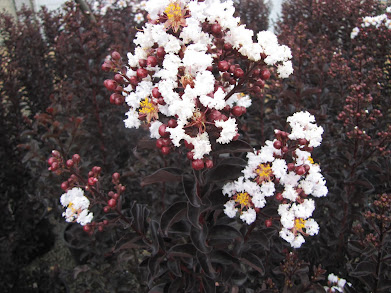 ...and a pair of Winter Gem boxwoods under the garage window.  I really love that vibrant, glossy green, and I think it will be striking between the deep burgundy leaves of the crepe myrtle! 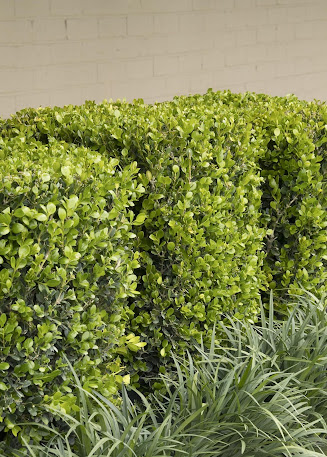 It's hard to imagine exactly what it will look like with those bushes gone - they are so large - and I think I will need another bush just to the right of the tall fir tree.  Another pink azalea may go in there, to carry through with the three that are already there.
And FYI, that little domed window above the garage windows?  That's my studio!  I have a great view of the neighborhood from up there!
I also need to do some work on the flower bed on the left side of the house - it needs weeding, then I have an edging to put down, and mulch to add.  I'll post a picture when I finish that - the dutch irises in that bed are just spectacular right now!
So I've got plenty to do to keep me busy this week, both in the studio and outside.  Hopefully it will stop raining enough to get the yard work done, but in the meantime it will give me an opportunity to get the quilting done. 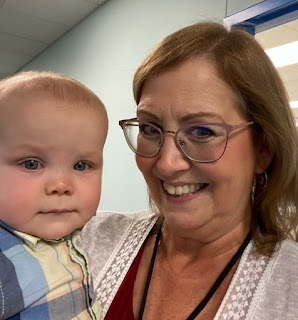 And guess what you get to do again when you've been vaccinated - hold babies!!!  This little guy was born last year during lockdown, and this was the first time I'd felt comfortable asking a parent if I could hold the baby.  I'm so glad Josiah was my first - he's a pretty happy-go-lucky kid, comfortable with almost anyone!  We had a good time while his dad helped set up tables and chairs for an event at church.  It's nice to see things getting a little bit back to normal again!
So now, I really want to know - - - what are YOU working on this week?
Hugs!
Sarah
Posted by Sarah Craig at 9:26 PM

Email ThisBlogThis!Share to TwitterShare to FacebookShare to Pinterest
Labels: Make-A-List