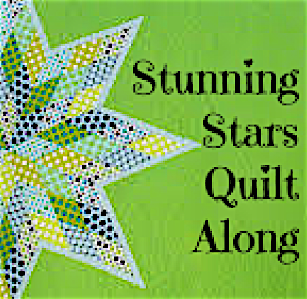 The day has finally arrived - the beginning of the Stunning Stars Quilt-Along!  Now, this isn't your usual quilt-along.  I won't be showing you steps to make just one quilt - over the next six Sundays I'll be sharing six simple quilts, all with a star theme, that are perfect for charity quilts.  Then, right after those six weeks, the Hands2Help Charity Quilt Challenge begins - and you'll be all ready with some great inspiration and instructions so you can jump right in!  Sound good?  Great!  Let's get started! 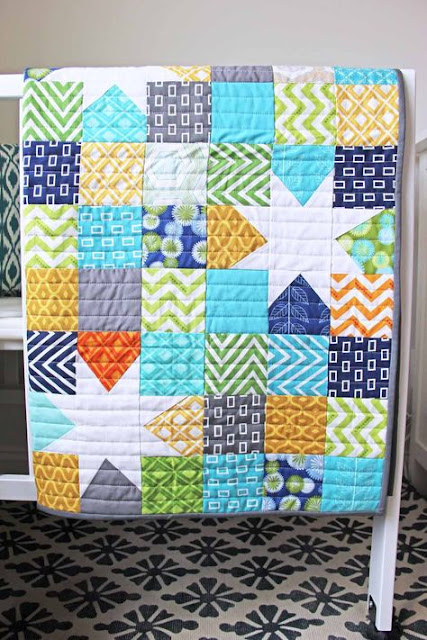 A long time ago, I saw this quilt on Pinterest and pinned it to my "bucket list" board.  I loved the bright colors and thought it made an adorable baby quilt!  But it sat there on my list, just a dream... 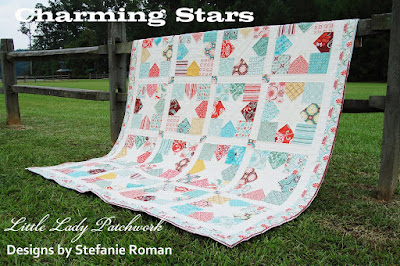 Then I started seeing the "charming stars" blocks cropping up on blogs - simple, sweet stars done in an inverse way using charm squares.  When I started thinking about the quilts for this quilt-along, these two came to mind right away!  Combined with my ridiculous supply of scraps, this quilt was the ultimate result... 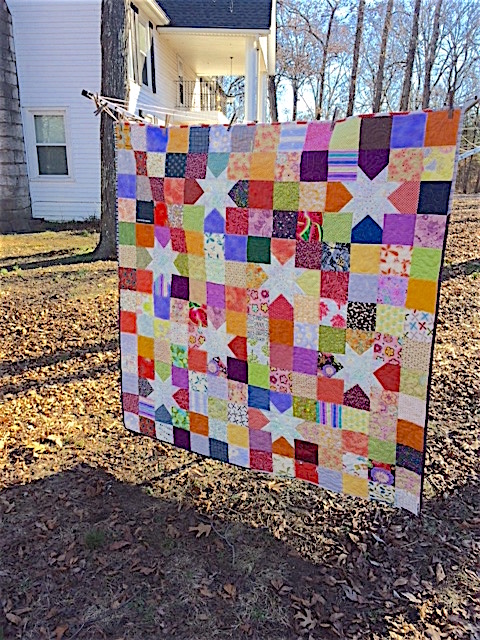 I guess the best name for this quilt would be "Scrappy Stars"!  It's very simple - using 5" squares, you make eight 9-patch blocks and eight Charming Stars blocks.  Assemble them together in a checkerboard pattern and add a border made of 5" squares (that's so you don't lose those cute star points by covering them with your binding) and you're done!  This quilt finishes out at about 63" square, and is a great size for a charity quilt.  It would also be simple to make it smaller or larger, either by reducing the number of blocks, or by using smaller squares to create the blocks in the first place. 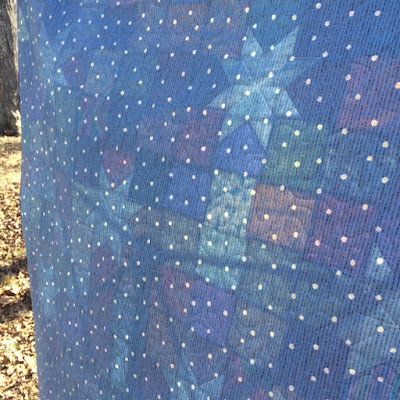 It's hard to see, but I quilted this using a swirly random meander around the stars, and straight line quilting in the stars to set them off.  I used white bobbin thread on this blue backing, so the stars show up even on the back.

And I can testify that this is a quick quilt - the one above is actually my second "iteration" of this quilt.  Because when I stepped back and looked at the finished flimsy of my first effort, this is what I saw... 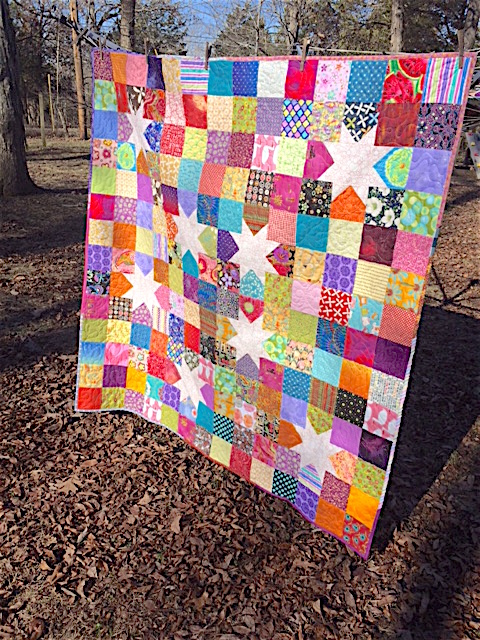 Erk!  That is NOT where those stars are supposed to be!  Now, don't get me wrong - this layout is growing on me, but I know that random placement is difficult for some people, so I wanted to show the quilt in its original design, with all the stars symmetrically placed.  So, being too lazy to rip out seams and re-arrange the blocks - - - I started all over again!  I managed to put a second top together in about four hours.  So this is definitely a quick and easy quilt!  (And making two of them ate up a LOT of scraps!) 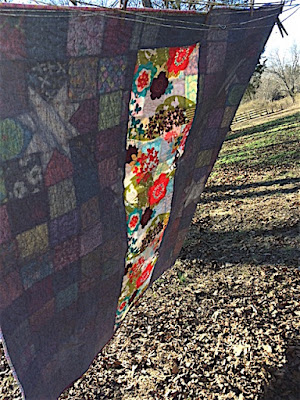 And not only is the front a great stash buster, but I managed to use more fabric from the stash for the back of this one!  I've been saving that pretty print panel for a while now, and it made a nice pairing with the random collection of prints on the front.

So here's the specifics of what you'll need for this quilt: 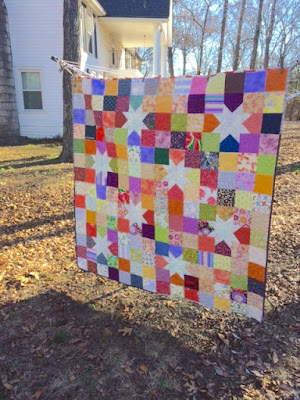 Light or near-white solid:  Eight 5" squares and sixty-four 2 7/8" squares of the same fabric.  If you use one fabric for all the stars, it requires slightly more than a half yard (about 20" or so) of yardage.  Or you can make them from scraps, each one a different light or near-white solid.  Each star takes one 5" square and eight 2 7/8" squares.

Print fabrics:  188  5" squares in various prints.  This is a great way to use up your scraps.  You will want darker colored squares for the star blocks so the stars show up well, but you can use some lighter squares in the 9-patch blocks and borders.

The tutorial for the Charming Stars blocks can be found here.  She did such a great job of showing how to make them, I don't think I can improve on it.  The one thing I do in addition, though, is make bonus HSTs from the corners of my star points.  You can read about the technique in this post.  Making bonus HSTs only takes a few minutes longer and then you have the building blocks for another project later!  (Make eight of these blocks.)

I'm sure most of you are familiar with how to make a nine-patch block, but just in case, here's a great tutorial from Connecting Threads!  (Make eight of these blocks.) 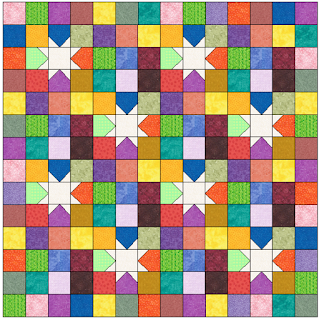 Here's a diagram of the layout, but as stated above, it's pretty simple - lay out the 9-patch blocks and the star blocks in a checkerboard pattern, then add a border of 5" squares (strips of 12 on each side, strips of 14 across top and bottom) to finish it off.  Your quilt should finish out at about 63" square.

Now - go forth and make a scrappy quilt!!

Check in next week for a bright, bold, starry quilt!!