TN's Turn on the AMB Blog Hop, & a Giveaway! 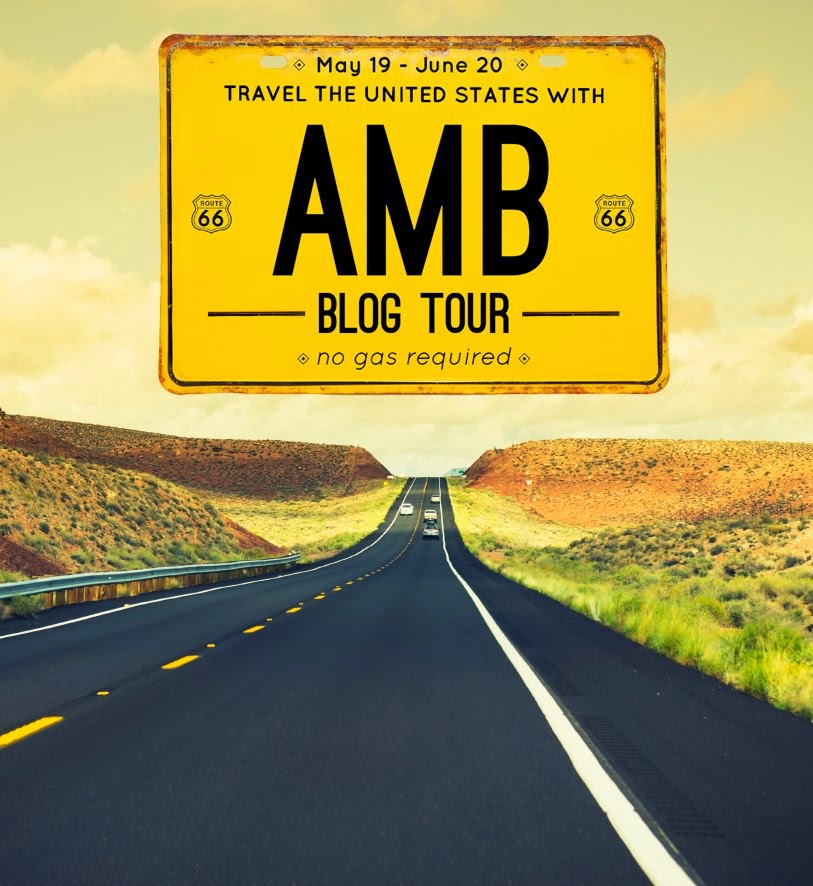 Welcome to Tennessee’s stop on the AMB Blog Hop!  American Made Brand Fabrics has come out with a line of fifty beautiful solid fabrics, made of American-grown cotton right here in the US.  I hope you’re enjoying the hop so far - I’ve been really inspired by all the fabulous work all my predecessors have done, and can’t wait to see the blocks of those who follow!  (You can see the entire list of hop participants here if this is the first you've heard about it.)  But for now, let me tell you a little bit about Tennessee....

I’ve lived in Tennessee for the past 25 years, longer than I’ve lived anywhere else, and I have to tell you, I love this state!  It’s absolutely gorgeous, and there’s so much to do and see.  We’re far enough south to avoid the harsh winters of the north, and far enough north to avoid the blistering heat in the south.

Tennessee was granted statehood in 1796.  Interestingly, it was the last state to secede during the Civil War, and the first to be re-admitted to the Union.  It stretches from the Appalachian Mountains in the east to the Mississippi River in the west.  Geographically it is broken into three “grand divisions", each with its own beauty and sights to see.

The Eastern Division, centered in Knoxville, comprises the mountainous portion of the state.  The Great Smoky Mountains National Park is the most visited national park in the United States. The park was named for the smoke-like bluish haze that often envelops these fabled mountains.


Gatlinburg and Pigeon Forge are famous for their beautiful fall scenery and shopping, and you wouldn’t want to miss the Dollywood theme park while you are there. Knoxville hosted the 1982 World’s Fair, and you can still see the Sunsphere, built especially for the World’s Fair as you drive through.

In 1974 Walter Cronkite designated Knoxville as the “Streaking Capital of the World.”  It was in the spring of that year that an estimated 5,000 people on the University of Tennessee’s famous Cumberland Avenue took their clothes off…stripping on the “strip.” The atomic bomb, modern history’s most closely guarded secret, was developed in nearby Oak Ridge.

The Middle Division, centered in Nashville, the capitol, is full of rolling hills and beautiful lakes.  Nashville is the home of country music, and yes, the show “Nashville” is actually filmed here.  It’s a lot of fun to watch the show and see places around town that I’ve been!  Nashville hosts the CMA Music Festival each June, when country music fans from around the world come to meet country musicians in person.


Nashville's Grand Ole Opry is the longest continuously running live radio program in the world. It has broadcast every Friday and Saturday night since 1925.  The phrase “good to the last drop” was coined by Theodore Roosevelt at the Maxwell House Hotel in Nashville after he finished a cup of the locally produced coffee they served. 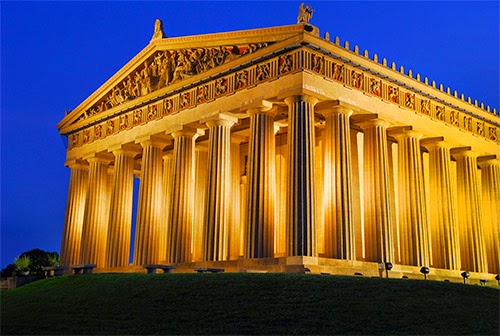 You can also visit a life-sized replica of the Parthenon near downtown Nashville, which was built for the 1897 Centennial Exposition.

Just down I-24 in Coffee County, Bonnaroo is held each year - a massive music festival attended by tens of thousands each year and boasting a wide variety of styles of music.

The festival basically turns a 700-acre farm into the 7th largest city in Tennessee overnight, for four days!

Chattanooga, down on the Georgia border, is famous for the world’s steepest passenger railway line and the largest fresh water aquarium in the world.


The Glen Miller Orchestra won the first gold record awarded by the music industry for its recording of The Chattanooga Choo-Choo.  Coca-Cola was first bottled in 1899 at a plant on Patten Parkway in downtown Chattanooga after two local attorneys purchased the bottling rights to the drink for $l.00.

The Western Division, with Memphis as its largest city, is in the delta, with low-lying fertile farmlands. Beale Street is famous for its music and barbecue.  The Peabody Hotel in downtown Memphis boasts a flock of resident ducks who make a trek to the indoor water fountain each day!


Cotton made Memphis a major port on the Mississippi River. The Memphis Cotton Exchange still handles approximately one-third of the entire American cotton crop each year.  Graceland, the home of Elvis Presley, is also located there, and sees 600,000 visitors each year.


It is the second most visited private home in America, second only to Biltmore House in Ashville, NC. The legendary railroad engineer Casey Jones, who was killed when his train crashed on April 30, 1900, lived in Jackson, TN and Jackson is also the home of Pringles Potato Crisps! 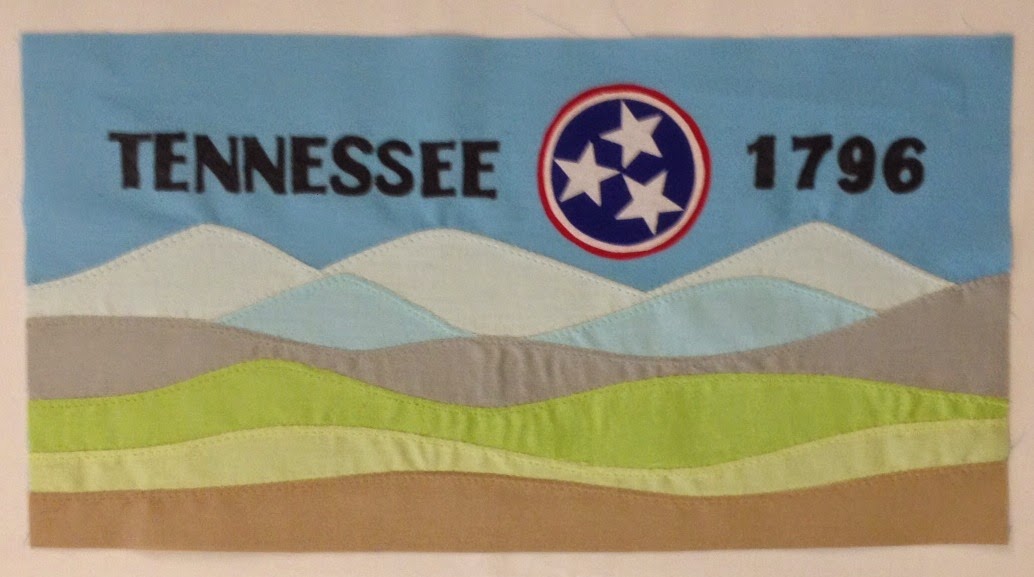 The license plate block I designed represents the different divisions of the state.  At the bottom of the block, you can see the brown representing the Mississippi River, also known as The Big Muddy, which borders the western section of the state.  Next you see the green rolling hills of the central portion of the state, and finally the gray and blue bands which reflect the beautiful mountains of the Great Smokies.  All of this under a beautiful Tennessee blue sky! The red, white and blue circle comes from the center of the Tennessee flag. The three stars in its center represent the three grand divisions of the state.

Tutorial for the block:

This block measures 6.5” high by 12.5” wide.  I used the following American Made Brand solid colors:

You can either print the landscape design from the PDF, or create your own landscape design.  Once you have your design, print or trace it so that each piece is longer (top to bottom) than the visible portion on the block.  This will allow you to overlap the pieces to stitch them together.  I used Heat and Bond to applique my pieces to the block.  Use whatever technique works best for you - I am not skilled at applique and it’s quite likely there’s an easier, better technique to use!

Starting from the bottom, take the bottom two applique pieces (the brown Mississippi piece and the light lime piece) and overlay the brown on the light lime.  Using your preferred technique, applique the two pieces together along the top of the brown piece.  I used a machine blanket stitch with clear thread. You could just as easily use needle turn applique or raw edge stitching.

After stitching it down, turn the piece over and cut away the light lime that overlays the brown, so that you have a piece with only one layer. 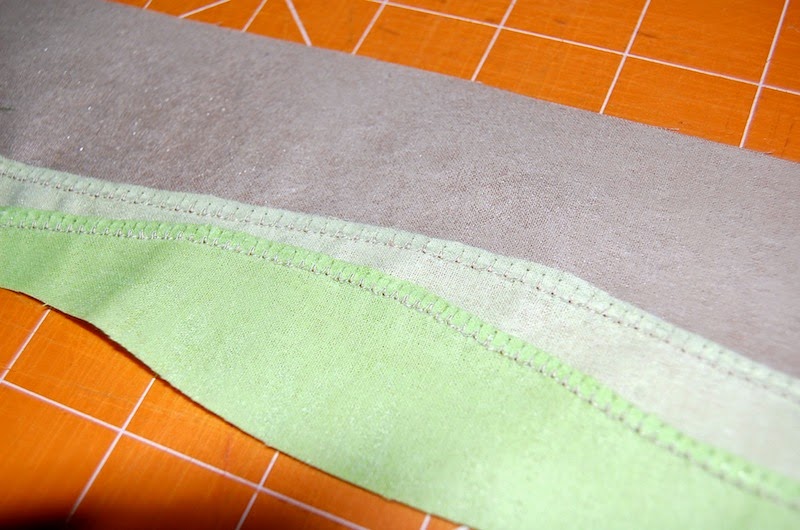 This will help reduce the thickness of your finished piece.  Repeat the process until the entire landscape applique is finished.

To make the Tennessee state symbol, trace the symbol in the PDF to cut circles for the outer, middle, and inner circles, and the three stars.  As before, I used Heat-N-Bond to make my symbol, so I traced the designs onto Heat-N-Bond before ironing it to the fabrics.   Assemble the symbol.

Lay the applique and symbol on your background piece to determine placement of your lettering.  I traced the lettering onto my block and (carefully) filled it in with a fabric marker, because as I said, applique is not my strong suit.  It could also be embroidered or appliqued if desired.

After the lettering is completed, attach the landscape applique and state symbol.  You’re done!

If you'd like a copy of the PDF file that contains the landscape diagram, the lettering and the state symbol, please request it in a comment below, leave your email address, and I'll send it to you!

And now for the fun part - the giveaway!  American Made Brand has provided a fat quarter bundle - eight beautiful, colorful pieces of their new fabric!

And I'm adding to that a "uniquely Tennessee"  gift bundle - GooGoo Clusters (the world's first combination candy bar, invented right here in Nashville, TN), Moon Pies (made in Chattanooga, TN since 1917), and a few other goodies to give you a taste of Tennessee!  So how can you win all this goodness?

1.  Leave a comment sharing how many US states you've visited or lived in, and which is your favorite!

2.  Hop over to the American Made Brand site, then come back here and leave another comment mentioning your favorite color out of the fifty for a second entry!

3.   Leave a comment letting me know you're a follower for a third entry!

Easy peasy!  Entries will be accepted until Tuesday, June 3rd at 6 pm, and I'll announce a winner on Wednesday, June 4th.  Please please please be sure you aren't a no-reply blogger - or if you are, or don't know, please leave your email address in your comment.  It would be a shame if you won, but I couldn't reach you to let you know!

Oh, and by the way, if you're looking for a place to purchase these wonderful solids, my friend Shannon at Fabrics N Quilts (in Jamestown, TN) has all fifty colors!  Check her out - she'll set you up in fine style!

PS Be sure to check back Sunday to see the beautiful quilts that have been created by the participants in this year's Hands2Help Charity Quilt Challenge, and then come again next Monday for something really special!  Hope to see you then!
Posted by Sarah Craig at 5:00 AM